Max Armstrong of Super M, Inc., commissioned Martinez Creative Group to develop the app, with the support of sponsors Great Lakes® Hybrids and Genuity®. The second award came in the News Release category of the AAEA MarComm Awards for the news release used to promote the app’s launch in September 2013. 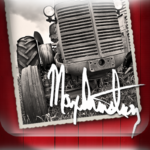 About the App  Max Armstrong’s Tractor App is available for free download from iTunes for iPhone and iPad and from Google Play for Android smartphones and tablets. To learn about the various features of the app, watch the app demo video here.

About the award The 2014 AAEA Communications Awards were presented Tuesday, July 29, 2014, at the Agricultural Media Summit at the Indianapolis Marriott Downtown in Indianapolis. The annual awards program attracted 1,100 entries this year in its five major divisions for agricultural writers, designers, photographers and marketing communications companies.

About AAEA AAEA serves as a forum for an open exchange of ideas among colleagues in an environment that fosters professional excellence. Tradition has kept the association strong since 1921 and its culture defines its niche – the editors, writers, photographers, designers and other communications professionals serving the nation’s farm magazines. Today, AAEA’s purpose stands as testament to the vision, courage, and determination of the small group of farm magazine editors who founded the organization: to provide a forum that allows professionals to share and exchange ideas, issues, and goals with their colleagues while offering opportunities for professional improvement.

About Max Armstrong Max Armstrong is one of the most widely recognized and highly regarded agricultural journalists in America. He is director of broadcasting for Penton/Farm Progress Companies; co-host of the television show This Week in AgriBusiness, seen across the United States each weekend; and he helps host a weekly hour-long ag program on WGN Radio in Chicago. His radio broadcasts “Max Armstrong’s Midwest Digest” and “Farm Progress America” are carried daily on more than 140 stations from New York to California. Millions of farmers, ranchers and consumers have viewed Armstrong’s TV programs and heard his radio broadcasts during his nearly 40 years of industry experience.